At long last a generation of young Indian chefs is redefining the country’s gastronomy. Chef Prateek Sadhu is one of them. At his restaurant Masque in Mumbai he explores the riches of his vast country reinterpreting old dishes and techniques. Along the way, he and his business partner Aditi Dugar have built up a network of suppliers opening up a wealth of sustainably farmed ingredients, which find their way into a mesmerizing 10-course tasting menu and a lineup of vibrant cocktails and mocktails that, besides a reasonably good winelist, accompany you throughout the evening. Be warned, no classic tikka masala, biryani or crispy dosas!

India has always been a culinary mecca. The country, almost twelve times the size of France, has more to offer than most can fathom. From the alpine cuisine in the Himalayas to the spicy Chettinad dishes in the tropical south of Tamil Nadu, and from the slightly sweet Gujarati style of cooking in the west to the East Asian influenced fare in the seven states east of Bangladesh, the variety is immense. However, until a decade ago, going out for dinner, as tasty and authentic as it may have been, seldomly reached beyond a quick dinner at the level of skillful homecooking. But a new generation of well-trained chefs with international experience is changing the scene. Prateek Sadhu may well be the leader of the pack. Born in Kashmir, the thirty-something chef passed his exam at the Culinary Institute of America with flying colours and trained at some of the greatest restaurants in the world, like Alinea and The French Laundry. In Copenhagen Sadhu trained at Noma and also made friends with Amass’ chef Matt Orlando. It was this friendship that gave him the final push to bring seasonal, ingredient-based fine dining to India. In 2016 he and his business partner Aditi Dugar opened Masque restaurant in Mumbai’s Mahalaxmi district.

Streetfood
The Mumbaikars, or Bombayites, as the inhabitants of India’s biggest metropolis are called, have always been staunch and proud streetfood eaters. Mid-afternoon, all around the city, little carts start popping up, from which savoury snacks such as pani puri (small crisp spheres filled with yoghurt, tamarind and koriander water) or bhel (crunchy rice puffs, onion, coriander, potato, tamarind and sometimes pomegranate) are dispensed. While Delhi has a longstanding tradition of courtly cuisine – the Moghuls who ruled over large swaths of India had their palaces here –, Mumbai is a much younger city. Founded by the Portuguese – Bombay derives from bom baia or good bay – it developed in an open, commercial hub rather than a royal, traditional city. This may well be the reason why Mumbai is quicker to get onto the bandwagon of global, fine dining.

Iron stakes
Masque is located in one of the old textile mills in a maze of small streets that, at least during the evening, was surprisingly quiet for Mumbai standards. Despite towering real estate prices, the area still feels distinctively edgy. Masque’s high-ceilinged dining room has an industrial ambience, accentuated by an artsy creation of iron stakes that divides the bar from the clothless tables. A stairwell leads up to the mezzanine with additional seating space. The lights are low and the air conditioning is high, but the atmosphere is lively and all tables are booked, which is a good sign just a week after New Year’s.

Evolution and regionality
Similar to Virgilio Martinez in Peru, Sadhu and his team draw their inspiration primarily from the wealth of ingredients the country has to offer. He sources them from selected suppliers, but sixty percent, mostly fruit and vegetables, comes from their farm near Pune. The dish of little gem salad (with Himalayan cheese and melon), for instance, is meant to showcase the quality of their produce.
Although not always easy to detect, many dishes hail back to some old form of vernacular cooking. The yakhni (or broth) of chicken bones, with chicken liver, Kashmiri morels, shiitake, fermented shiitake juice, kombu and waterchestnut, finished with an oil of koji-fermented rice, is a perfectly balanced creation, but it’s hard to situate it in Kashmir. Sadhu’s idea was to show that India, mostly known for its spiciness, could also bring forth umami-rich ingredients and preparations. He succeeded gloriously. On the other hand, the homemade katlam, a Kashmiri soft bun served with mud crab, apple-turmeric chutney, cultured cream, eggplant and chilli sauce feels unmistakably Indian.
“Indian cuisine has always been influenced by migration. What we now consider to be typically Indian dishes often came from other regions like Central Asia,” Sadhu says. “That is why I am not afraid to change things. At Masque we study old dishes critically and use what we think is good. My cuisine is not only about ingredients and seasonality, but it is also about evolution and regionality.” In other words, Sadhu is not afraid to introduce foreign ingredients or techniques. The pumpkin fudge, for example, is inspired by the traditional bundi, a sweet of chickpea flour eaten in memory of Lord Hanuman. But Sadhu’s version is made as English fudge.

Latin beat
Reminiscent of Massimo Bottura, Sadhu’s dishes try to bring back sensations through flavours that have been deeply engrained in his memory. And, for that matter, in the collective memory of India. You need to have a sound understanding of the universe of Indian, especially Kashmiri, cooking in order to pick up on the regionality. For Europeans, this is not always easy. However, the dishes are without exception extremely flavourful. Sometimes, unintentionally, they remind you of other parts of the world. A crispy, spherical corn shell with avocado filling makes the Mumbai classic pani puri seem to dance to a Latin American beat.

Vegetarianism
In India, vegetarianism isn’t a modern fad that fits into a sustainable lifestyle. On the contrary, it is deeply rooted in local culture, especially among the dominant Hindu population. With more than 40 percent of Masque’s diners choosing to eat vegetarian, it is commercially necessary to have a vegetarian menu. Pumpkin cheesecake, for example, comes instead of the elaborate, three-day brined and house-smoked pork (based on an East Indian classic), and chewy beetroot replaces raw barramundi in a dish with coconut, crispy quinoa and kafir (lime) leaves (Keralan). The fish as well as the tuber are infused with an oil of curry leaf, the uncrowned king of Indian spices that is hard to get outside the subcontinent and therefore all the more special to experience when in India. Its savoury-sweet aroma and flavour are hard to describe, but bring to mind the warm, dusty air in an Indian city permeated with the smoke of wood-fired stoves and the smell of softly roasted chicory.

Freedom
Sadhu likes to experiment and encourages his staff to do so too. The Masque Lab is the place where all chefs of the team have the freedom to try out new ingredients or flavour combinations, explore the concepts of nose-to-tail or root-to-leaf and cross over into unexplored culinary territory. Obviously, Sadhu has the final say and separates the wheat from the chaff. Meanwhile, they have built up such confidence, that they have opened the Lab for guests. In the same vein as, say, Simon Rogan’s Aulis at l’Enclume, diners get a taste of the creative process in a top restaurant. By doing so, Sadhu not only secures a pipeline of innovative dishes, but also trains the next batch of Indian chefs. Creativity, out-of-the-box thinking and understanding the restaurant inside out is also stimulated by allowing staff members to work across different areas. The sommelier, for instance, worked in the kitchen the day after our visit. Likewise, you could see a chef in the front of the house from time to time.

Gewürztraminer
The winelist is still driven by the ancient idea that Indian cuisine is best paired with an aromatic, off-dry wine. Alsatian Gewürztraminer is the traditional wine of choice and obviously also present on Masque’s wine menu, besides an array of German Rieslings with a bit of residual sugar. India as a wine country is in the infant stage. The main winegrowing country of India around the town of Nashik, less than 200 kilometers northwest of Mumbai, is now home to a number of wineries producing wines that certainly deserve credit. However, when you come across the same three labels wherever you go, you realise the wine business is still minute. Not only is refraining from drinking alcohol, just as vegetarianism, a deeply rooted part of the culture, wine production and trade are also hampered by the fact that some states are dry, some levy high taxes and others have a three-tier system (similar to the USA) that adds cost by extending the supply chain. Despite all these restrictions, the winelist at Masque stands out within the Indian context. Moreover, the sommeliers are knowledgeable and eager to learn. And if you can’t find anything that matches your taste, there are always cocktails.

Overall, Masque delivers an experience that is simultaneously authentic Indian and modern cosmopolitan, reflecting the contrasts of a country in transition. Tradition is strong, but modernity is eagerly and easily embraced. Obviously, Masque caters to the Mumbai and global elite, but the dishes show the deep culinary roots of an incredibly diverse country. As Sadhu predicts, it may well be the world’s next hottest food destination.

A version of this article was published (in Norwegian) in the May 2020 issue (print) of Apéritif magazine. 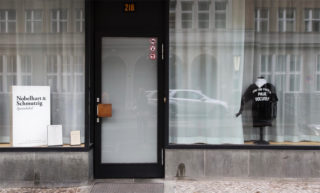