Undogmatic Man with a Vision and a Mission

“If I fancy a goulash of top quality organic meat, I go to restaurant Hausmair,” says Paul Ivić, Michelin star chef at vegetarian restaurant Tian in Vienna. He is an advocate of small-scale, organic vegetable farming and more conscious food consumption, he gets excited about kohlrabi and he made vegetarian dining fashionable – although he would never use that word. He is a man with a mission, but surprisingly undogmatic. I spoke to him, and his sommelier André Drechsler, to learn about his philosophy and the story behind his success.

The conversation started hesitantly. My admittedly somewhat general opening: “You just turned 40, a good moment to reflect” didn’t seem to spark much enthusiasm. “I have reflected earlier in life”, was the short answer.
But gradually the conversation gained swing and when I had to leave two hours later it felt as if we could have talked forever.

Ivić, born Tyrolean, had never planned to become a cook, although in hindsight, he says, it doesn’t surprise him. At 12 he already rebelled against the industrial school food. As it couldn’t even play second string to his mother’s wonderfully aromatic lunch dishes, he simply stopped going to the soulless school canteen, much to the irritation of the management. Moreover, his parents ran a restaurant and his grandfather was a farmer. So, food was in his DNA.

After stations in Austria, Switzerland and Spain, Ivić realised at 32 he had overexploited himself – body and mind. In the kitchens of modern top restaurants, stress levels can be high and hours long, resulting in too little sleep and a glass too many. More importantly, the compromises in quality, resulting from demands for ever lower prices and leading to large-scale agricultural production, and uniformity, as well as monotony in flavor, had put him off completely. “Imagine,” Ivić says, “in the past the salmon was the king of fish. Eating salmon was pure luxury. Somehow, people still consider it a treat, but most salmon is from large fish farms where they get overtreated with antibiotics posing a serious health risk. Why are people accepting this?”

Quality and flavour
Ivić needed a clean break. Around that time he spoke to a woman who sold truly free-range eggs. “When I scrambled, smelled and tasted them, I had a flashback to when I chased the chicken at my granddad’s farm. The flavour of the eggs made me realise I had to focus on sustainable, high quality produce.”

When he, soon thereafter, met Christian Halper, a wealthy man without a culinary background but with a big heart for sustainable gastronomy and the determination to invest in a high-end vegetarian restaurant, Tian was born and Ivić became its chef. Receiving a Michelin star in 2014 was proof of the fact that Halper had put his trust in the right person.

Flavour is at the core of what Ivić does. Full-flavoured produce can only come from healthy soil. For Ivić small farmers tend to deliver better products. “When it is small, people tend to take better care of it.” It goes without saying that he would never buy from farmers who use insecticides or pesticides. Ideally small, organic farms should meet the world’s demand for vegetables and fruit.
Does he think we can feed seven billion people with organic goods, I ask? “Yes”, he responds decidedly. “One third of our food is thrown away, one third are grains for industrial, large-scale livestock farming and only one third we actually eat. Do we really need to eat meat every day? Our health should be the key criterium.” Eating at Tian, as we had done some weeks earlier, proved his approach is probably healthy, and certainly extremely tasty and exciting.

Cooking and eating in Ivić’s philosophy is not only to take responsibility, it is also a matter of trust. “Just like a doctor, a diner entrusts his health to a chef, hence our jackets are white too”, he points out.
But eating is also to nourish and to bring people together. “I want to treat my guests the same way my parents treated me, using organic ingredients because they want their child to have what is the healthiest and most flavorsome.”
He leans over the table with enthusiasm as he goes on: “Our Sharing Chef’s Garden bistro formula invites a family or group of friends to share a five-course seasonal menu as if it were a meal at home.” It is a double-edged sword, as it also brings together two cooks, one from the bistro and one from the starred restaurant, who jointly create a seasonal menu, thus establishing cross-pollination of ideas and talent.
While we talk, I get a dish from the new Chef’s Garden menu served, based on the mild Spanish onion (Gemüsezwiebel): a braised half onion with artfully blackened edges on top of a mayonaise (no eggs, some dishes are vegan) and a marmelade of the same onion. When I recount that I grew up on the notion that sauteed onions are a great substitute for meat, Ivić tells he calls the onion “the Balkan apple” as his granddad ate them as if they were apples. The new dish was an instant hit.

Ivić owes his success partly to the resilience and perseverance he inherited from his father, who, Croatian by birth, had to fight stereotypes and outright discrimination after having moved to Austria. Whenever there was a burglary in the neighbourhood, the police always came to their house first.
“Resilience aside, without my employees and Halper’s support, Tian wouldn’t be what it is today”, Ivić continues.
When I ask if his success is also due to the fact that he isn’t vegetarian himself, he immediately agrees. It makes his clients less suspicious; as a matter of fact it makes them curious. If a non-vegetarian chef manages to cook together a Michelin star with vegetarian dishes, it somehow proves that a vegetarian dinner can be exciting and delicious.

Obtaining the coveted Michelin star wasn’t a goal in itself, but rather a means to an end: creating a platform to demonstrate that sustainable, vegetarian cuisine is much more than a boring salad. But Ivić is honest. “I am proud, also because it is a recognition of what we are doing.” The platform has meanwhile grown. Ivić is not only in charge of Tian Restaurant, but since two-and-a-half years, he also stands at the helm of Tian Bistro – the more affordable sibling of the flagship restaurant – that successfully strives to bring vegetarian cuisine to a broader public. When we visited a few days earlier, the tables on both terraces, in the front and back, were packed. Recently his platform is getting international allure too: in early 2018, Ivić took over at Tian in Munich. He was initially discouraged by the quality that he found there, but he claims he has turned it around. Now the DNA of Munich and Vienna is the same, but the dishes aren’t, because, remaining true to his philosophy, Ivić doesn’t like uniformity.

Undogmatic
Although strict when it comes to organic, small-scale farming, Ivić is undogmatic in many other ways. Respectfully he tells about his grandfather who had a mixed farm: some cows and some vineyards. The cows were well fed, spent most of their time roaming in the fields and were looked after with love. “They were members of the family. Slaughtering them was not a fun thing, but the cow had led a good life and its meat fed the family for a long time.” This way the consumption of meat hardly posed a problem.

With the wines it isn’t any different. “Initially, I didn’t like natural wines,” Ivić confesses. “But for a large part it was ignorance.” Now, the wine list mostly consists of wines from organically or bio-dynamically grown grapes produced with minimal intervention. “But not all wines have to be unfiltered and cloudy”, sommelier André Drechsel joins in, testifying to the undogmatic attitude at Tian.

One of the pet subjects in sustainable gastronomy is using local produce only. Does Ivić also belong to that school? He answers my question with another question. “What is local? I work with three farmers and six foragers who all operate within an hour from Vienna. But I don’t use Austrian produce only. The fact that Austria doesn’t produce olive oil doesn’t stop me from using it and because I feel a loyalty to my father’s home country I purchase it from Croatia.” Once again Drechsel confirms the same undogmatic approach for his wine choice. “For the wine pairing we focus on Austrian wines; that is what our clientele expects. But when I find an interesting Furmint from Hungary that perfectly complements a dish, I happily recommend it. Moreover, Hungary is a mere 50 kilometers from Vienna’s city limits.” In general, Ivić favours geographical diversity. “One of my favorite things to eat is Tiroler Gröstl. It consists of only three ingredients: onions, originally from Asia, potatoes from South-America and speck from Tyrol”, but this obviously doesn’t feature on Tian’s menu.

So, what does his menu at Tian Restaurant look like? “My menus don’t have a dramaturgy; I don’t work towards a climactic main course. Every dish has to be special in its own way. Lighter, fresher dishes tend to come earlier on.” Here Drechsler jumps in: “I typically don’t like to pair a heavy dish with a big wine. I prefer to bring out extra nuances in such a dish with a lighter wine with more acidity.”

What can we expect from Ivić in the coming years? Struggling to find an answer, he first tells us what Halper wants: a third Tian Restaurant. Where? When? No concrete plans yet. Ivić isn’t very keen on the idea anyway. As he admits, his personal focus would be on expanding his knowledge and to work closer with a bigger number of small farmers. He loves being in the fields and his eyes light up when he pictures himself picking up a blushed kohlrabi and smelling its fresh, earthy aroma. He is evidently of the sort who realises the more you know, the more questions you have. Learning and personal development may well be his driving force. With excitement in his voice he recounts how the team recently rediscovered the possibilities of dried and ground cloves.

A Norwegian adaptation of this article was published in the November 2018 issue (print) of Apéritif magazine. 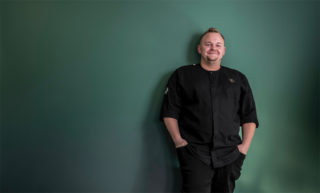 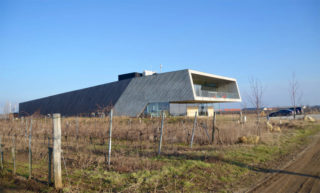 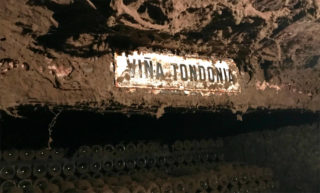 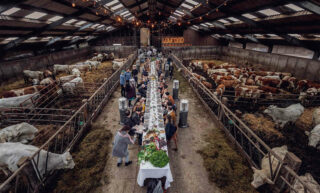